Divorce: What about the dogs? 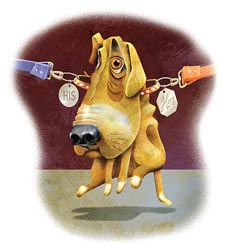 I recently came across a book entitled “I Was a Really Good Mom Before I Had Kids” and it kind of reminded me of my attitude about marriage… before I was married.

I pretty much had it all figured out and kind of rolled my eyes at anyone whose opinion differed. To wit: long engagements were stupid, living together before marriage was a must, when all else failed people could always change and – this was a big one – staying together “for the kids” was insane.

Obviously, my wisdom – or lack thereof – on the subject matter at hand needed a little reality check. Not that my ideas about marriage were all wrong, per se, but, like most things in life, the institution of marriage – and everything that surrounds it – is not black and white. What works for some people doesn’t work for others. What’s right for some is wrong for others.

There is not one blueprint for marriage; no two marriages are the same, and to think that you know what’s best for THE ENTIRE WORLD is just plain ignorant.

So, as far as my past thoughts on marriage, I plead ignorance. And let me tell ya, it’s not always bliss.

Someone once asked me what I did with my dogs when I got divorced, and when I told her my ex-husband and I share custody, she said, “Oh, you’re one of those people.”

Hmmm. Someone who loves her dogs? Who would do anything for them? Who thinks that even if a marriage isn’t working for the couple, the innocent parties involved shouldn’t have to suffer? If that’s the charge, then yes, I’m one of those people.

As I am sure is the case for many people who have gotten divorced, mine wasn’t something that happened overnight. We didn’t just one day look at each other and say, “Well, it’s been real.”

And the things is, I know that realization would have come a lot sooner if there hadn’t been dogs involved.

I’m not blaming the dogs, of course not. I’m saying that loving two innocent beings that were part of our marriage made things much more complicated when it came to ending it.

And I finally came to see what it was like for those parents I thought were so insane for staying together “for the kids.” For me, thinking about what was going to happen with the dogs was absolutely the hardest part about getting divorced.

It is heartbreaking not seeing my dogs every day. In fact, I have to go weeks without seeing them. Our divorce decree even includes a part about sharing custody. And I miss them every single moment I’m not with them.

Ryder was my dog before I even started dating my ex-husband. Then, when we got together, he brought his dog, Bismarck into the relationship. So “my” dog and “his” dog became “our” dogs. When Bismarck passed away, we brought another dog, Seth, into our family.

When we got divorced, a lot of people assumed that since Ryder was originally “my” dog, I would get to keep her. I understand that thought process, but then what about Seth? To me, keeping Ryder but giving Seth to my ex-husband would have been like saying that Seth wasn’t as important to me. And that is just not the case. I love them equally.

And not only do I love Ryder and Seth equally, but I know how much my ex-husband loves them both. Ryder became his daughter when we got married, so to me, trying to take her away from him would have been cruel. I think about if Bismarck had been alive when we got divorced… even though he was my ex-husband’s dog before he was mine, he became my boy, too. I couldn’t have given him up.

On top of that, Ryder and Seth love each other so much. They are brother and sister. They just wouldn’t understand being separated. So they both, together, go back and forth between my ex-husband and me. Of course I wish I had them both all the time, and maybe some people don’t get the arrangement, but for the most part, it works for us.

I’ve had the idea to write a post about dog custody for awhile now, but it wasn’t until I received an email from a reader recently, one who is going through her own dog custody plight, that I figured it was time to get it in writing. Unfortunately, there are no real laws when it comes to joint custody of dogs, so if one party decides not to be reasonable about it, there’s not much the other can do. My lawyer told me early on in my divorce process that the courts prefer to stay out of anything that involves custody of animals, so the best thing to do would be to figure it out amongst ourselves and just present it to the court. I think there needs to be something in the books, though, that protects not only those who love their animals, but the animals themselves. Because divorce happens to – and involves – both people and animals.

I think, looking at the positive here, that one good thing to come of all of this was that it made me less judgmental. Who am I to decide what is best, or what works or doesn’t work, for anyone? My decisions are mine, yours are yours, and who is either of us to decide what’s best for the other?

I think I finally have a handle on this concept when it comes to marriage. Changing your mind: sometimes a big reality check does the trick.