Get the Dirt… but Keep it Clean (thank you Clorox)

How interesting are these “dirty” little findings…

Gossip by the Numbers
Key findings from The Clorox Company and Ipsos online survey of 1,200 U.S. women ages 18-35 indicate:

More than 50 percent of America’s women report reading celebrity gossip at least once per week, including seven percent who claim they are addicted: Only 16 percent of women claim they never read celebrity news.

Nearly 70 percent of women indulge in celebrity news and gossip in their homes: Other top locations for women to catch up on the latest celebrity news include doctor’s offices (33%), the office (27%), and beauty salons (23%). A few women even read celebrity news while traveling in an airplane/airport (13%).

It’s not that I wish I was a celebrity… I just LOVE reading about them! 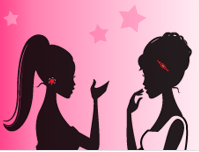 The truth is, though we may not want to admit it, we like hearing celebrity gossip but we also like to keep things clean. That’s why Clorox® Regular-Bleach is giving busy moms the chance to do both with Get the Dirt…but Keep it Clean, a new mobile program that delivers quick clean-up tips to your phone while letting you indulge in the celebrity lifestyle.

How fabulously chic is that?

Disclosure: I received the information from The Clorox Company at no cost to me.