The 2011 Boston Marathon (Photos and Video)

Last year I came home from the Boston Marathon with a finisher’s medal.

This year? A cowbell.

I think it’s awesome that Brian and I met through our common love of running, and I enjoy going to the same races together, but it’s also really fun to go to races as a spectator to support him.

Brian and I arrived in Boston on Sunday, the day before the marathon. 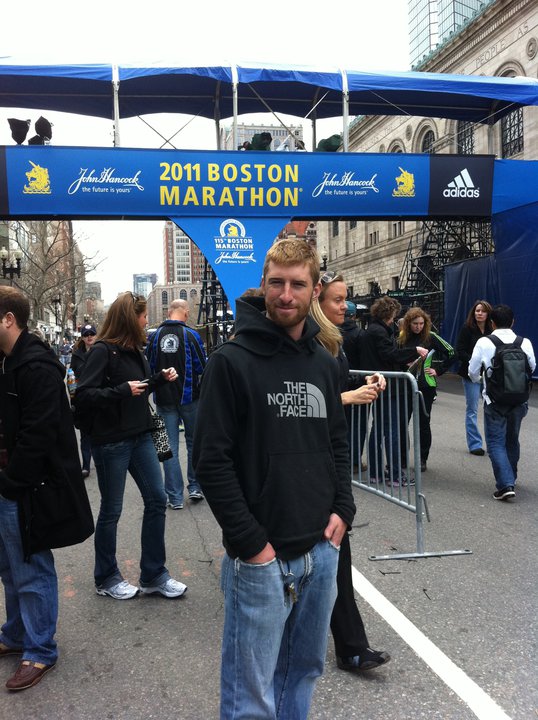 We went to the race expo to pick up his number (and my number, too, even though I had decided a few weeks ago not to run because of the injuries I’ve been dealing with. Tear.), then basically just hung out back at the hotel for the rest of the day so Brian could rest.

Since the race begins in Hopkinton and ends in Boston, buses take the athletes from Boston Common to the start of the race in the early morning on race day. We woke up at 5:15am so Brian could get ready and board the bus at 6:00am.

Once I saw him off, I went back to the hotel and waited for my parents. They were coming to support Brian, too, and we wanted to make sure we could get a good spot near the finish line on Boylston Street.

My parents got to Boston around 8:00am and met me at the hotel. We walked to the finish line and people were already lined up along all the course. We were able to find a spot for the three of us about .25 miles from the finish line.

And then we waited.

The elite women went off at 9:30am, so they arrived a few minutes before noon. We were following the progress of the women on Twitter and Facebook, so we knew that American Desiree Davila and Kenyan Caroline Kilel would be neck and neck. 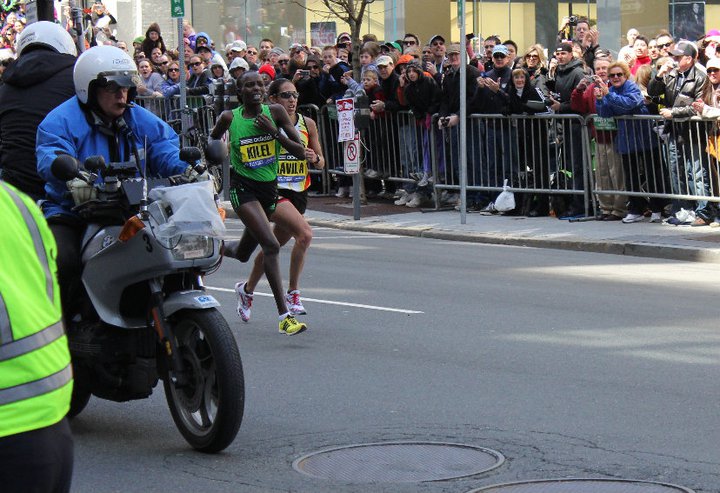 It was so exciting to watch them fly by us, knowing that an American woman had the chance to finish first at Boston – that hasn’t happened since 1985. Kilel ultimately finished 3 seconds ahead of Davila, but wow. What a literal race to the finish to witness.

And it was also amazing to see American Kara Goucher, who had a baby just 7 months ago, finish just about two minutes behind in fifth place. 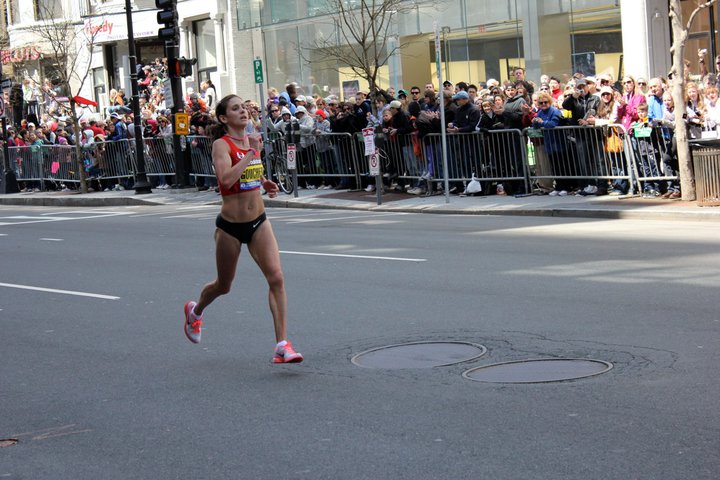 The elite men went off at 10:00am, along with the rest of the first wave of runners (which Brian was in). Once again, we were following along on our phones, so we knew that American Ryan Hall wasn’t in contention to win, but he was putting forth an amazing effort. (I later saw that he ran all but one of his 26 miles in under 5 minutes.)

Geoffrey Mutai and Moses Mosop, both from Kenya, flew by us in another close race to take first and second place. 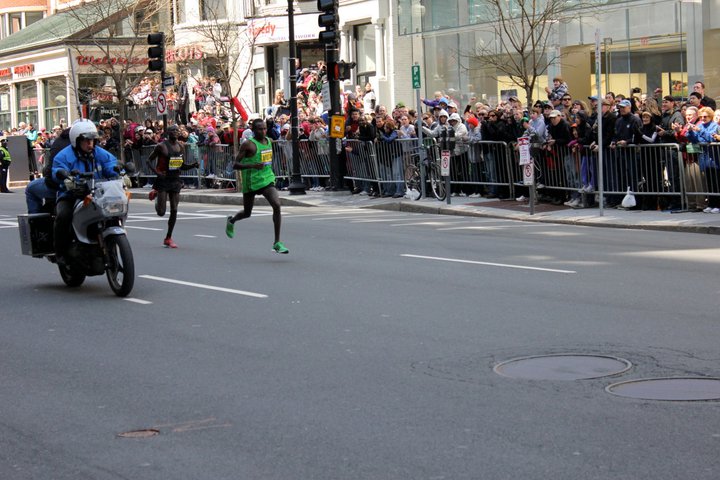 Ryan Hall followed close behind in fourth, running the course in 2:04:58. 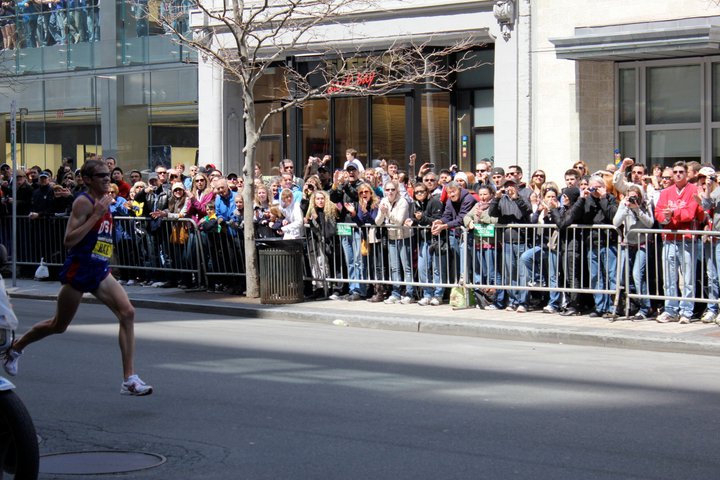 With that excitement behind us, we were more than ready to see Brian run by. Based on the tracking I was able to do on my phone (SO helpful!), I knew he was averaging a little over 7 minutes per mile and would be coming in at around a 3:15 marathon pace. While we waited, we enjoyed looking out for a few other fast runners who we knew would be coming in, and managed to see all but one of them go by.

I knew Brian was wearing a bright neon yellow/green shirt, so my parents and I searched the sea of runners coming towards us for the first sign of him. My dad and I spotted Brian at just about the same time, so we all got our cameras ready, and I got my Flip camera all set up to film him coming by.

I cannot put into words just how loud the crowd was. Even the video doesn’t do it justice. We were screaming Brian’s name at the top of our lungs, and he still almost didn’t hear us! Luckily he did, though, and we were so psyched to get him pointing at us as he ran the last few hundred meters to the finish line. 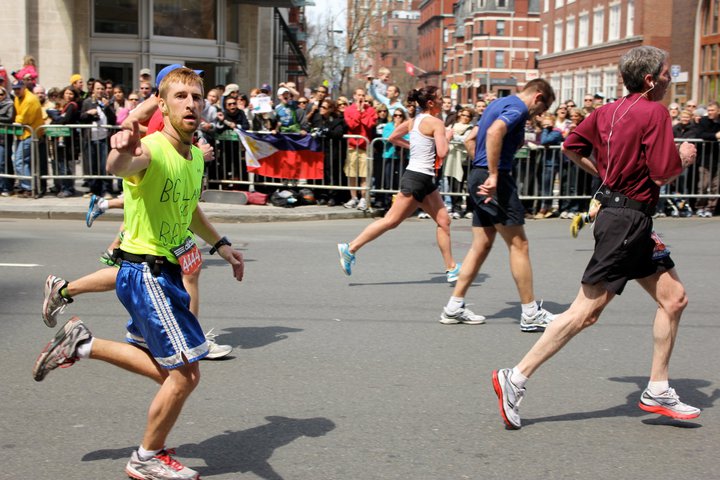 We ended up standing outside watching the race for over 5 hours, but it honestly didn’t even feel that long.

I’m so proud of my marathon man. Sure, between the two of us he was the only one who brought home the finisher’s medal this year… but a cowbell is a pretty good consolation prize.

I mean, who can’t use more cowbell, right? 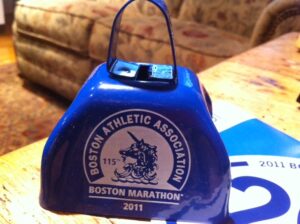