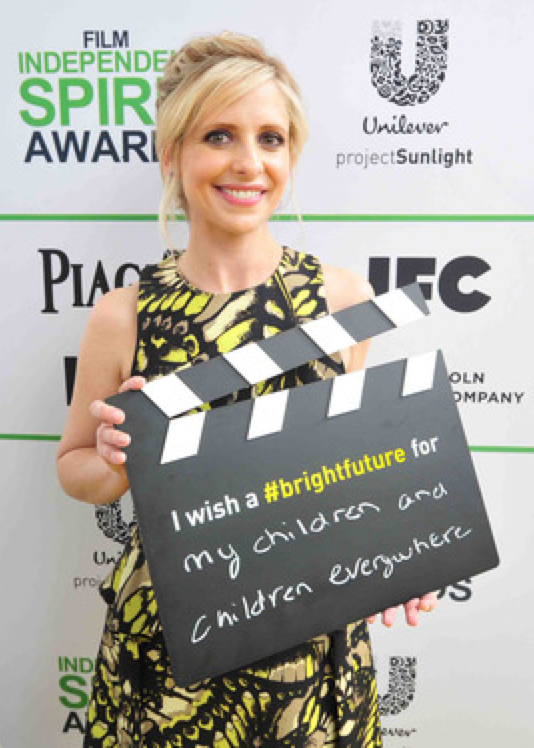 When I heard about Unilever’s Project Sunlight, I LOVED it! Absolutely incredible. Unilever Project Sunlightis an initiative to motivate millions of people to adopt more sustainable lifestyles.

Project Sunlight aims to make sustainable living desirable and achievable by inspiring people to look at the possibilities of a world where everyone lives well and within the natural limits of the planet.

It makes so much sense.

This past weekend, Unilever Project Sunlight partnered with the Film Independent Spirit Awards to help cast a spotlight on those in the industry who are helping to create a brighter future – and inspire others to do the same. While awards season arrival shows typically dedicate red-carpet banter to quips and couture, Unilever Project Sunlight and Film Independent rolled out the “yellow carpet” to hear stories about social good, sustainable living and those who are making a difference to create a brighter future.

“As our products – like Dove, Lipton, Hellmann’s and Suave – touch two billion people who use them every day, we have the ability to reach and galvanize them,” said Kees Kruythoff, President, Unilever, North America. “Our scale, coupled with the inspired stories and influence of those that are being honored by Film Independent, is a truly powerful combination to inspire people to want to take small steps to create a bright future for our children.”

Joining Unilever Project Sunlight to share her story and help capture the stories of Film Independent Spirit Award attendees was actress Sarah Michelle Gellar. She joined her fellow actors and filmmakers to discuss their hopes for a brighter future and what they’re doing to help create it.

“Of all the roles I’ve played as a film and television actress, the most important one by far has been being a mom,” explained Gellar. “It’s changed my motivation, my inspiration and my day-to-day behavior as I think about the future for my children.”

To recognize the power of film to inspire change, Unilever Project Sunlight is also sponsoring the first-ever Bright Future Award, honoring a filmmaker whose work motivates individuals to take action to create a better world. The inaugural Bright Future Award recipient is Patrick Creadon, whose film, If You Build It, exemplifies the power of hands-on education and the impact a few budding creative minds can have on the future of a community. As part of the award, Unilever provided Creadon with a grant to continue making inspirational films.

Learn more about If You Build It and watch highlights from the Film Independent Spirit Awards “yellow carpet” on www.projectsunlight.us, including exclusive behind-the-scenes interviews, and join the conversation on Twitter with #brightfuture.