I’m excited to share with you 2 amazing recipes for perfect Valentine’s Day desserts from Hilton! I experienced the wonder and beauty of Hilton in October. We’ve always been big Hilton fans, but this was a cool “dessert” fact that I didn’t know about the hotel!

Hilton History: The first reference to the “brownie” in America appears in the Sears Roebuck Catalog published in Chicago in 1898. Specifically at the direction of Bertha Palmer to be served at the Columbian Exposition World Fair in 1893, the brownie was created in Palmer House® A Hilton hotel kitchen in the late 19th century. 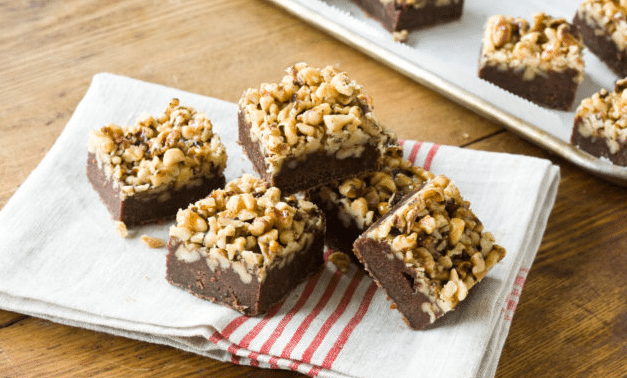 Pour into 9”x12” baking sheet, sprinkle walnuts on top,
press walnuts down slightly into mixture with your hand, and bake in a preheated oven at 300˚F for 30-40 min.

The brownies are done when the edges start to become a little crispy and they have raised about ¼”.

*Note; even when the brownie is properly baked it will test “gooey” with a toothpick in the middle due to the
richness of the mixture.

After removing from the oven allow to cool about 30 min before spreading a thick layer of the glaze with a pastry brush.

Glaze: Mix together the water, preserves and unflavored gelatin in a saucepan, mix thoroughly and bring to a boil for 2 min. *Special Tip: The brownies are easier to cut if you place in the freezer for about 3-4 hours after glazing.

Hilton History: Many people think that Red Velvet Cake was created in the Southern United States, but, although it has gained popularity in the South, it actually originated as a signature dish at the Waldorf Astoria in the 1920s.

Red Velvet Cake Hotel: Waldorf Astoria New York
Ingredients: Ingredients for the cake
3 oz unsweetened chocolate
2 c granulated sugar
4 large eggs
1½ c vegetable oil
1½ tsp vanilla extract
2 c all-purpose flour
2¼ tsp baking soda
¼ tsp salt
1½ lb canned beets, drained, puréed
1 tsp red food color
Ingredients for the icing
2 c heavy cream
12 oz cream cheese, room temp.
12 oz mascarpone cheese
½ tsp vanilla extract
1½ c powdered sugar, sifted
Directions:
Preheat oven to 350°F.
Butter and line three 9-inch round cake pans with waxed paper.
Melt the chocolate in a metal bowl set over a saucepan of boiling water.
Meanwhile, mix the sugar, eggs, oil and vanilla with an electric mixer on low speed for 2 minutes. In a mixing bowl, sift together flour, baking soda and salt.
Add the dry ingredients to the egg mixture and continue to mix on low speed until everything is incorporated.
Add the melted chocolate to the mixture while mixing on low speed.
Add the puréed beets and food coloring. Continue to mix on low speed.
Evenly divide the batter between the 3 pans and bake in the middle of the oven for 20 minutes or until the center of the cake is done.
Remove from the oven and transfer to a cooling rack.
Let cool for 10 minutes in pans, then turn the layers out onto the rack and let cool completely.
To make the icing, pour cream into a bowl and whip to soft peaks. Place in the refrigerator. Place the cream cheese in the bowl of an electric mixer fitted with a paddle attachment and mix on low speed until it is soft and smooth.
Add the mascarpone and continue to mix on low speed until the cheeses are well combined.
Add the vanilla and powdered sugar and mix.
Turn off the mixer and fold in the whipped cream by hand with a spatula.
Using a serrated knife, trim the top of each layer of cake so that it is flat.
Top each slice with icing and repeat until all the layers are covered, and then ice the top and sides of the cake.
All done! 🙂
Share
Lifestyle