A few Wednesday nights ago, my husband Barry came home from work with a little gift for me.

It was an autographed baseball.

Barry had been invited to a luncheon with the guest speaker being Bill Lee – the Bill “Spaceman” Lee – Boston Red Sox Hall of Fame pitcher.  After the luncheon, guests had the opportunity to speak with Bill, and Barry, the great Red Sox fan whom he is, didn’t waste that opportunity AND to tell Bill that his wife (that would be me) had actually played a game of softball with him.

It was quite some time ago.

And it comes with a story.

A story that lives in my mind as the day I had THE GREATEST sports moment of my entire life.

And this is why Barry scored me a treasured personalized reminder of living on this Earth, this day, this moment, in an autographed baseball by Bill “Spaceman” Lee himself… 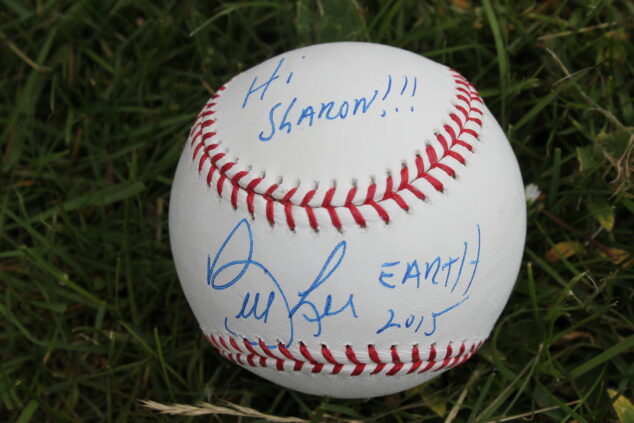 (No, Spaceman does NOT know the intricacies of that day, that moment; nor do more than a handful of people.)

Because this autographed baseball gives me SO much joy in remembering a field of dreams day with 3 dick-wad co-workers that I’m gonna finally tell it.

My boss didn’t like me. He didn’t like me because I spoke up when I disagreed. Not like argumentative or insubordinate, but concerned and experienced. I had been in my position for years when this guy came on-board. Actually, come to think of it, this guy didn’t like anyone who didn’t agree with him, but he particularly didn’t like me.

These bosses always come with soldiers. Yes, sir. Yes, sir. Will do, sir. Brainless, spineless people who will do anything for a little perk or two here-and-there, and most especially join the attack army against the designated targeted ones.

I was a designated target.

So it came to me as a what are they up to now puzzle when I was invited to attend a team-building day with the boss AND two of his dick-wad soldiers.

I could see the pleasure build on his sadistic face when he mentioned the names of two other attendees. NOOOOOOOOOOOOOOOOOOOOO. One male. One female.

I knew I would be persecuted as a non-team player if I declined (well, I couldn’t actually have declined anyway. It was already written in blood.)

And soon the day arrived.

The premise of this team-building was a sports metaphor – one with real, live professional athletes.

Ah. I began to see the light. My three team-building partners were jocks. Jocks like that’s all they talked about. Their egos. Their self-worth. Sad has-beens or never-weres.

Man-oh-man, I didn’t see this coming.

Ahhhhhhhhhhh with a capital A.

I certainly wasn’t a jock. I wore stylish skirts and suits and high heels and carried leather purses and totes filled with corrected homework.

Ahhhhhhhhhhh. And it was only five minutes into the introduction on the morning of the seminar when I began to sweat.

We would be TEAM-BUILDING while relying on each other during games, real live games with professional athletes, of baseball and basketball.

Did I mention with professional athletes?

A sickening breakfast table of this Team Dick-Wad chatting it up. Smiles. Oh, such fun.

Is she here? Ha ha hahahahahhhahhahahah!

And this is a big BUT.

I am most composed under pressure. Anyone who knows me, knows this.

THESE PEOPLE DIDN’T KNOW A HOOT IN HELL ABOUT ME.

We next gathered our stuff and were geared up with bats, softballs and batting helmets at a semi-professional baseball stadium, a very storied and historic baseball field, in Newport, RI.

The day was sunny, cool and spectacular. It reminded me of mornings I’d gather with a group of boys and girls in my neighborhood and we’d all head off to play baseball. Or days I’d play softball at school recess or on my middle school softball team.

Or times I’d head off by myself to hit softballs in the big old field near my house, trying so hard to reach the big, old, vacant schoolhouse on the perimeter of the field – like the boys did.

I never did reach that old, vacant schoolhouse, but I did learn to play baseball AND softball.

So I found myself standing next to my “Teammates”, getting instructions from a couple of very nice “Team-Building” crew guys, one of whom happened to be Mike Stenhouse, former Red Sox outfielder and first baseman. We were to hit, of course, get on base, of course, and then listen to what our Team Leader would have us do – run, steal, hold, etc. We were to listen to our leader, in this case the head dick-wad, to function as a team.

I could hear the smirks on the faces of my teammates, waiting for the ultimate humiliation of me doing nothing to build this team.

I was first-up. Of course. I held my breath, held my bat, calmed my nerves and stepped into the batter’s box. Bat up, feet in position, eyes straight, sweating like a sieve through the morning cool, I heard Mike Stenhouse in the catcher’s position say, “Well, someone’s played some softball!”

If I could have stopped and hugged him, I would have.

If I could have danced in the batter’s box, I would have.

But that’s all I needed to face the Spaceman, the Boston Red Sox Hall-of-Famer, and I hit a clean single and sprinted down the first base line.

In your freakin’ face, dick-wads.

But as I’ve come to know, things like this only make dick-wads more vicious. They hate when they’re wronged. I knew he’d have something else up his dick-wad sleeve.

Because that clean single off Spaceman was a great highlight of my athletic life, but not THE ONE. That would happen after jockwoman hit a dribbler single and the “men” hit enough to get us home. There wasn’t much team-building there. No calls to steal. No calls to hold up. Now they knew I could hit and they knew that I knew the nuances of the game of softball.

No fun for them.

We were instructed by a Red Sox batting coach to head to the outfield. This guy would be hitting fly balls to us. Our Team Leader was to assess whom should attempt to catch each ball and call out a name; but the interesting thing is that the person who had the best shot at catching the ball may not be called. This way, each of us was to be on high alert for the Team, backing up everyone all the time. Like a good team.

So a few balls were hit, high up and away, and Head Dick-wad called out jockwoman and lil’dick more than a few times, while I backed up as I was supposed to.

I knew something was up and I will admit that it was stomach-sickening. If you don’t believe that people can behave this way, trust me, they can.

And then it came.

A ball came flying up so high that I could barely see it. I waited for a name.

I knew the ball was headed my way, in left field.

I began running toward it.

I had time to actually talk to myself, that ball was so high. It was floating like the biggest dream or nightmare of my life – whichever I chose.

I watched it beginning to descend.

I knew I had waited just a second shy of running toward it because my name was not called.

No back-up sounds behind me.

I knew I HAD TO CATCH THAT BALL.

My glove out in front of me now.

I had time to think of all the fly balls that came to me while playing ball with the boys, balls hit all the way to that old schoolhouse.

I had frickin’ time to think as my entire childhood rushed before me.

I caught good sight on that fly ball in the sun.

I reached forward like my arms were 10 feet long.

I caught that ball.

The batting coach was screaming, waving his arms, shouting, “Best catch of the day!”

Honestly, I could have been fired from my job at that moment in time and I wouldn’t have stopped smiling. The best sports moment of my life had just happened.

There’s hell on this great Earth of ours sometimes. There’s no denying it.

It just sometimes comes in the oddest forms, in the most surprising ways – like a fly ball to left field.

Where some years ago, Team Dick-wad stood standing while I caught that ball.

Earth to dick-wads and bullies – there is karma.

Earth to Spaceman Lee – thank you for the memories.

And oh, we did go on that afternoon to play a game of basketball with another couple of professional athletes. My Team had no idea that I could do that, too.