When “One Half Mile” means more than a measurement of distance.

When “One Half Mile” cannot be defined by duration.

When “One Half Mile” excites both debate and disagreement in small town America.

When “One Half Mile” exemplifies and teaches the very fundamentals of the First Amendment of the Bill of Rights, one of the cornerstones of American Freedoms — guaranteeing freedom of speech, press, assembly and petition.

When “One Half Mile” is measured in passion.

There is a controversy brewing in my home town of Bristol, Rhode Island, a town founded in 1680, a town committed to preservation of its picturesque and historic charm, and home to *the oldest continuously running 4th of July Celebration in America.

OK. This may seem a bit dramatic and no chests of tea are being hurled into our harbor, but it has similar elements of decisions without representation and refusal of concessions leading to waves of resistance.

This One Half Mile has been, since 1976, the beginning of the 2.4-mile Parade Route, when a shorter route could no longer accommodate the tens of thousand of spectators to the town and parade. Along this One Half Mile are 60 homes, homes often referred to as, simply, “on the parade route.” People often purchase these homes because they are on the parade route. Also along this One Half Mile is our local VFW – Post 237 – from which Veterans traditionally gather on July 4th to view the parade, and Benjamin Church Manor, a senior housing community, where these senior citizens have a perfect view of our famous parade.

My husband Barry and I are among these on the parade route homeowners and our celebrations begin on or around Flag Day, June 14th, when all the red, white & blue comes out, unfurled and sometimes inventive and laying a welcoming mat of patriotism straight into downtown. Our 11 grandchildren (soon to be 12!) come from all corners of Rhode Island to help with the bins upon bins of bunting and flags and they await with baited breath for the night the magical red, white & blue stripes appear right in front of our home ~ The Parade Route. This stretch is seeded in tradition, love of country, celebration, family and neighbors meeting by the dawn’s early light to place chairs, blankets and the like for guests and visitors to BRISTOL’S PARADE, including our One Half Mile… 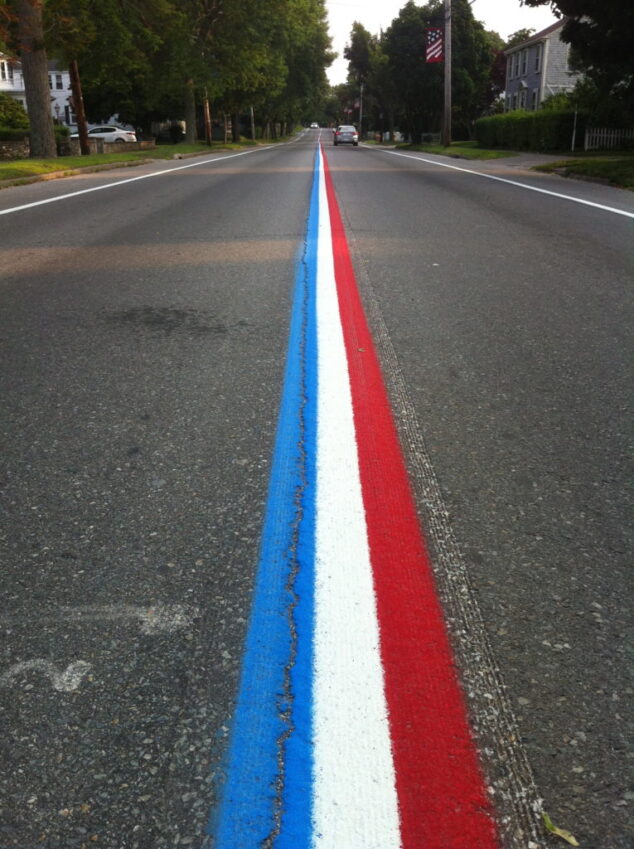 From Flag Day and through the actual 4th of July, the many Town of Bristol festivities ~ including a true old-fashioned carnival at the Town Common, 2 weeks of free outdoor concerts, a spectacular Fireworks Display and, of course, the Parade ~ welcome thousands of people to Bristol, breathing such life and liberty and not only the pursuit, but the acquisition of happiness to residents and visitors alike.

The Committees that spend an entire year of planning, fundraising and executing these activities/festivities are deserving of the greatest praise and gratitude.

But let me get back to that One Half Mile.

On January 6, 2016, with a vote of 46 – 9 of attending Parade Committee Members, with no knowledge/input/discussion from the residents of Bristol, the 2.4-mile route was shorted to just under 2 miles, eliminating the first one half mile. The Committee cited declined participation (parade is too long, too hot for marchers) and security reasons.

No-one but these people knew.

This news was announced the next day, January 7th, many residents hearing it for the first time on local noon newscasts; and many others, like me, through dozens of text messages from family members, friends, neighbors in, for lack of a better word, shock.

As one would expect, news of this vote spread as quickly as Brown Betty raced through Lexington carrying Paul Revere (not really sure if this is the name of Paul Revere’s horse, but I like it good enough!). A Facebook Page popped up almost immediately – Save the Bristol 4th Parade Route, gathering almost 4,000 LIKES in two days. A Petition has gathered 2,500+ on-line signatures against this vote as well.

Barry and I decided to take action with organizing an Informational/Organizational Meeting to “Save the First Half Mile” ~ and when we approached the leadership at our local VFW to house the meeting, they were all in, citing the lack of communication on the Committee’s behalf and disrespectful displacement of the many, many Veterans who view their Parade from the VFW.

Barry and I printed fliers and distributed them by hand to the 6o affected homes on our One Half Mile parade route. Homeowners greeted us with the greatest concern for this course of events and were anxious to address the situation by assembling to organize.

We learned of homeowners who had retained attorneys to question the legality of such a vote.

One thing rang common with these homeowners within this First Half Mile stretch of Parade — great passion in celebration of our 4th of July through our Parade. This passion is something that CAN be measured in people’s traditions, upholding everything sacred, if I may. Tradition wrapped in country. Country wrapped in patriotism. Patriotism wrapped in history. History wrapped in our Veterans and our senior citizens who still remember. Memory wrapped in honor.

These are the things that Barry and I want to pass along to our grandchildren. This is why this First Half Mile is so important to us.

Now, all of this being said, I haven’t personally spoken to Fran O’Donnell, the Committee’s Vice Chairwoman, but I did listen to her radio interview last evening on the Matt Allen Show – WPRO-AM. Ms. O’Donnell has scheduled a Special Meeting for the Committee to vote again on the plans for a shortened parade route – at Colt Andrews  School, Bristol, January 14th at 7 pm. She explains, “I feel that it is critical that the 4th of July committee not be dictated by other interests,” making reference to our “Save the First Half Mile” informational meeting scheduled for Tuesday, January 19, 7 pm, at the VFW. Ms. O’Donnell makes reference to not succumbing to the pressure of this group.

To this end, I took careful notes while listening and developed 4 questions to hopefully ask Ms. O’Donnell and/or Committee Members at this meeting:

I don’t believe that the Townspeople of Bristol want our cup ‘o tea to runneth over with discontent, but we are certainly willing, as evidenced by the reaction to the series of 4th of July “events” of the past 7 days, to speak freely, address the press, assemble and petition en masse in order to create an open dialogue regarding The Town’s Parade.

One Half Mile is much more than distance, duration and debate.

One Half Mile is an eternity when the passion wrapped up in it — is taken away.

This is our Town, folks. Let’s work together in wrapping The Town in its historic Parade.

*Bristol holds the distinction of having the oldest, continuous Fourth of July Celebration in America. The Celebration, first held in 1785, was started by Bristolians who actually took part in the Revolutionary War thus welding a permanent tie with our modern Celebrations. Bristol’s original fervor in celebrating Independence Day was nurtured by extreme hardships suffered during the Revolution. This fervor continues today as Bristol becomes arguably the most patriotic town in America during the three-week Celebration which culminates in the gala Parade on Independence Day which is watched by over 200,000 enthusiastic people. (Source: Explore Bristol by Land or Sea)