Poetry and the Moon, for Kids ~

Poetry and the Moon, for Kids ~

Three things I love with all my heart are my Grandkids, the Moon and Poetry.

I love these things so much that I often find myself combining the 3!

Which brings me to last Friday, January 13th, early evening, maybe 7:00 pm or so.

Yes, Friday the 13th and a Full Moon to boot, rising in a globe of wonder over my little town… 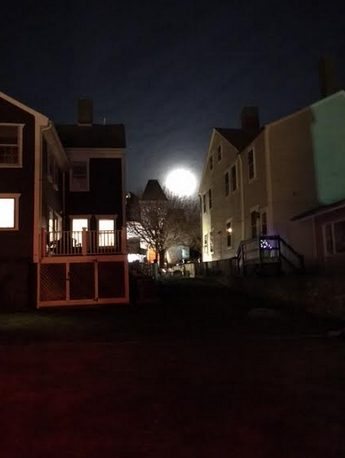 I didn’t see it at first, but my soon-to-be 3-year old grandson did. Apparently, Brian listens to his Grandma talking, singing, photographing, honoring the glory of The Moon. My favorite little “Moon” ditty/poem/nursery rhyme to sing to the sky is Mother Goose’s Hey, Diddle, Diddle.

Of course, I don’t go into the theory of origins of this little ditty, the ones about Mother Goose, in 1765, “borrowing” some of the hey and diddle and fiddle all that nonsensical verse from the likes of ancient Greeks, references to Elizabeth I’s court, etc.

I don’t even go into the astronomy theory that the cat, fiddle, cow, dog, dish and spoon represent constellations in the night sky, farmers and when to plant seeds.

No, the history of Mother Goose and these fun theories are saved for the older grandkids.

I just sing this nursery rhyme song/poem to the little ones whenever I see the moon.

Hey, diddle, diddle,
The cat and the fiddle,
The cow jumped over the moon;
The little dog laughed
To see such sport,
And the dish ran away with the spoon.
So, back to last Friday night. Pop-up and I had just finished dinner with Brian’s parents and baby sister. Brian was getting antsy, so he and I left the restaurant. He immediately began running up the street, and I mean running and up the street. The street is rather uphill, especially for a 2-year old.
He was saying something to me, but truth be told, he was running so fast that I could hardly keep up, never mind hear what he was saying.
He turned into the parking lot where his parents’ car was parked. He stopped. He was looking at that Full Moon, the very one pictured above, hovering for him in the moment, between two buildings.
He was singing Hey, Diddle Diddle. He had seen the MOON. He had been singing Hey, Diddle, Diddle all the way up that hill!
Well, if a Grandma’s heart can be as BIG as the FULL MOON… mine certainly was!
And we stopped and we sang some more in the light of that silvery moon.
Share
Personal