The 10 Sounds in my House (on any given Friday)…

I spent all day Friday in bed or on the couch… sick. I’m hardly ever sick (as most moms know, we’re really not allowed to take sick days), but this past Friday I just was hit, and hit hard.

Working from home, I’m with the boys all day… with my husband not working, he’s home with me, but the day is usually (and always) crazy and busy and fast and furious. I try and get as much work as I can get done before the boys wake up, and then I spend the rest of the day with my “to-do” list and just try and bang through it. Having Matt home to take care of the boys has been the BIGGEST help of all. He takes care of everything for them while I work. Which usually means… throughout the day, I’m in the office or on our kitchen table writing, taking photos, making videos and/or on the phone.

But on Friday. I did nothing. And it was just a regular day in the McClelland household that I got to observe. 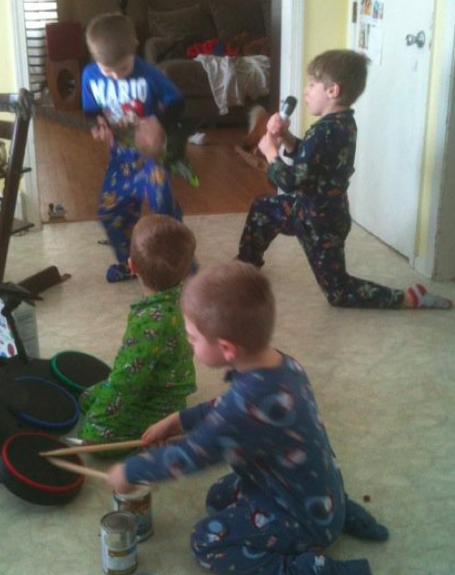 And it was HILARIOUS.

4 boys. Oh, mama mia! As I was at the dentist on Thursday afternoon, she asked me what life was like with the boys, and all I could say was, “Busy!” She laughed. But it was listening to the sounds of my house on Friday that I wish I could completely interpret into words… it’s busy, but it’s the best busy on earth.

These were some of the sounds on Friday:

1. The blasting of Mario Brothers for the Wii…

2. The flushing of the toilet, quickly followed by my husband saying, “Don’t forget to wash those hands!”

5. William blaring “Dynamite” and singing along to all the words. And anytime he “messed’ up, starting over.

6. Occasional brother fighting sprinkled throughout the day. The brother fights kill me… they fight over the craziest things – Legos, the red Wii remote, the green sippy cup, what game will be played on the XBOX or the Wii, etc. As a girl, I kind of remember fighting with my sister and letting it fester for a couple of hours. Boys… they’re a different breed. They fight and then best buds minutes later. It’s hilarious.

7. Laughter from the backyard.

9. William asking me and Matt to give him math equations…

10. Toy Story. It seems to be that this movie is on a continuous loop in this house…

But it’s these sounds that make my house… well, my house. I don’t know any different, nor do I want to. My boys. My guys. My little men. This is my version of normal.