Dinner with a Friend

It’s amazing when you stop and think about how much a friend can impact your life. 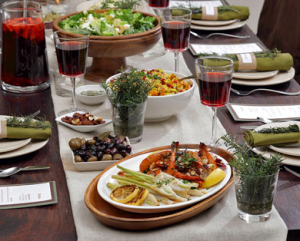 I had dinner last night with one of my best friend’s from Brown – who I haven’t physically seen – in 10 years! 10 years! The last time I saw her was at on my wedding day, she was one of my bridesmaid’s. This was a girl who I was practically inseparable from back in 1998… where she went, I went. Where I went, she went. I have so many memories from our college days together, and every single one of them puts a smile on my face. I even have photos to prove it.

But it’s one memory that I have to truly thank her for… from the bottom of heart. It’s this memory that left its longest and biggest impact on my life…

I’ll never forget meeting this guy Matt McClelland on the main green of campus one morning.

In any case, we met one day – October 28, 1998 (whose counting?) – on the main green of campus. He likes to say he gave me the “drive-bye” wave as he was leaving class and I was drinking a coffee on the Blue Room Steps of campus. I like to say he was just lucky I was on the main green at 8AM that morning. 😉 But as he walked by, I waved back and suddenly, he was over next to me talking (kismet). I knew that the only “friend” connection we had was this very good girlfriend of ours… so as Matt was about to leave to head to his next class (and as I scrabbled to think of another reason to see him), I mentioned briefly that we (me and my friend) were heading to the Emerald Square Mall that night to get Halloween costumes… little did I know that the second he left me on the main green, he called this very girlfriend and asked if he could come along…

Do you see fate starting to come into play here? She was our common glue here.

She set everything up… there were 4 of us heading to the mall for costumes – me, her, another girlfriend and Matty. We did dinner beforehand, then costume shopping at the mall. And then after all that was done, suggested Matt and I head to the movies that night… she was too “tired” to tag along, but didn’t want to hold us back. Ironically enough we saw “Practical Magic.”

What would have happened if Matt and I didn’t have this mutual friend?
Would we have eventually met?
How would we have pulled it off without having her intervene for the two of us?

After all, I knew my girlfriend thought the world of him as a friend, which absolutely impacted my feelings toward Matt from the very beginning… he was a “good” guy.

So there we were last night at dinner. With our husbands. Us with 4 kids. Her pregnant with her first.

I felt so happy to see her. I hadn’t seen her in so long… and being with her brought back waves of memories and emotions… it was wonderful. We have a history… and that’s a pretty cool thing to have with someone. We’ve both had so much happen in our lives over the last 10 years… lots of things… but it’s amazing that 2 friends can come back together and have it feel that not much time has passed at all.

Dinner with a friend… it’s an amazing thing.