This past Saturday, February 19, we had to put our Seth to rest.

As you know, he was diagnosed with bone cancer in November. He put up a good fight for 3 months, but he had just gotten too weak and tired. He wasn’t himself. He was letting us know that it was time.

To say that his absence has left us heartbroken would be a huge understatement. But we know he is no longer in pain, and there is comfort in that.

Sethy was 10 or 11 years old. I am not sure of his exact age, as my ex-husband and I took him in as a foster dog from Defenders of Animals when he was 7 years old and in need of a home. We officially adopted him shortly after.

I know that we gave Sethy a wonderful life for the 3 1/2 years we had him.

This is the first image I ever saw of Seth: 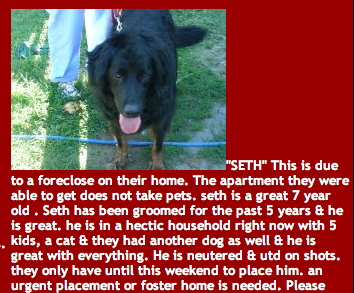 I still remember opening my email, seeing that sweet face, and just feeling the need to do something to help him.

Within a short amount of time, Seth was part of our household, first, as I said, as a foster dog… we had just lost our dog Bismarck and were still heartbroken over that… plus, we weren’t sure how Ryder would react to another dog.

But Sethy’s gentle, sweet, loving personality won our hearts over quickly and he was soon a permanent member of our family.

He would get on my lap, all 110 lbs. of him, and just fall asleep so soundly and comfortably. He was so gentle and loving with my nieces and nephews. And after an adjustment period of a couple of weeks, Ryder just loved her brother Seth. 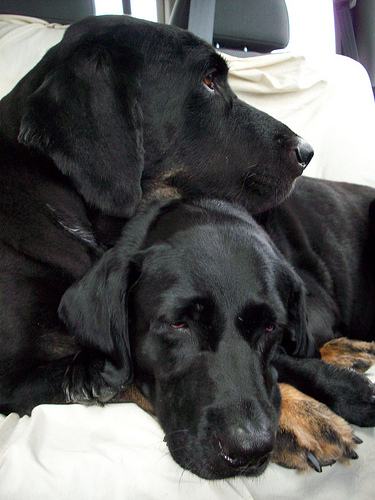 As I’ve mentioned before, when I got divorced, I felt like I let a lot of people down, and in many ways I felt like a failure as a dog mom. I didn’t want to break up the family that our dogs knew. It wasn’t their fault. And that was one of the toughest parts of the divorce – not knowing how the dogs would respond to the new situation.

Thankfully, Ryder and Seth seemed to adjust without much difficulty, though it was hard to adjust myself to sharing custody and not having them with me 100% of the time.

When I met Brian, I was so happy to learn that he understood the connection I had with my dogs; and he brought his dog Tansy into my life and into my heart.

From the start, Ryder was rather ambivalent about Tansy, which wasn’t a surprise; Ryder rarely gets all that excited about other dogs, and Tansy’s puppy playfulness was a little too much for her. But Sethy humored Tansy, and the two of them often played together. It was very cute.

But as Sethy got sicker, he had less and less energy to play with Tansy. And it was pretty remarkable to watch, over the last few weeks especially, that Ryder started stepping into Sethy’s role. Ryder started allowing Tansy to be her playmate, almost as if to let Sethy know that she would take care of Tansy. He didn’t have to worry.

While we didn’t actually say goodbye to Seth until February 19, the truth is, in a way I’ve been grieving his loss since he was diagnosed 3 months ago.

When I gave Seth and Ryder to my ex-husband over a week ago for his time with them, I felt that we were close to the end with Sethy. Then, last Thursday, when I saw my ex-husband’s phone number on my caller ID, I knew.

It was time for all of us to say goodbye and free Seth of his pain.

On Friday night at 9:30 p.m. we met at the spot we usually meet to exchange the dogs. Brian and Tansy were with me. On the way there, lightning lit up the sky… I think they were having a party up there, awaiting Sethy’s arrival.

It was an emotional exchange, and then Brian and I took Seth, Ryder and Tansy to my parents’ house to spend the night.

The next morning, we brought the dogs to the park near my parents’ house. It was so windy, and Sethy just enjoyed standing, then lying, in the big open field, the wind blowing around him. 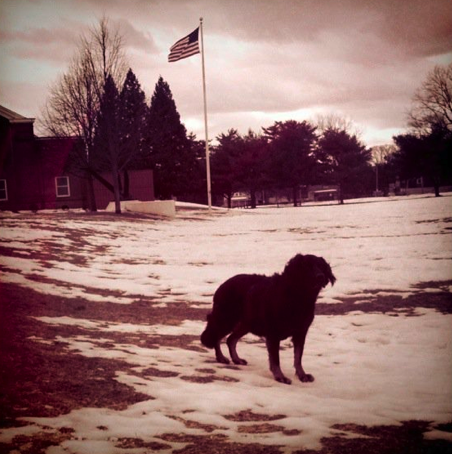 The sun peaked through the clouds from time to time, and there was even a little snow squall just as we left the park.

I had already called our vet to arrange for someone to come to Brian’s house to put Sethy to rest. So, after the park we headed back to Brian’s to spend our final hours with Seth.

He enjoyed a nice big soup bone outside in the sun and a delicious meal of a burger and fries that Brian made for him.

I was pretty strong all day… I knew we were making the right decision and there was a relief in knowing that Seth would not be in pain anymore… but when the vet called to say she’d be there in 15 minutes with her assistant, I just fell apart.

My parents were there, as well as Brian’s mom. Brian and I hugged Sethy as the vet gave him a sedative, and Sethy went to sleep so peacefully, his head right in my lap, as we hugged and kissed him.

Then the vet, with kindness and empathy, gently put him to rest.

We had a little memorial for Seth, just us, next to a photo of him taken last summer by a wonderful photographer, Julie Furtado.

I love the photo because it’s exactly how I want to remember Sethy – playful and vibrant, with his big happy tongue sticking out.

Then Brian, my parents and I went out for dinner. We toasted to Sethy and the beautiful love he brought into our lives.

While we ate, we were treated to a glorious sunset. 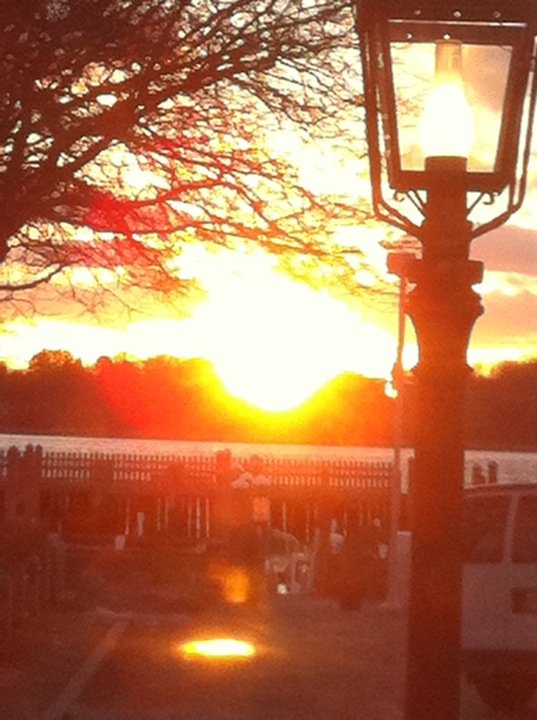 It gave us peace to know that Seth was receiving such a warm, wonderful welcome.

Brian said he had a tough time on Sunday morning, making two bowls of dog food for breakfast instead of three. And I have just had my moments… thinking of certain things at certain times that make me cry.

I so appreciate everyone who has reached out to offer sympathy. I know from experience that healing isn’t something that can be hurried.

I know it will get easier with time… but I will never, ever forget my big special mama’s boy… my sweet, loving, gentle Seth. 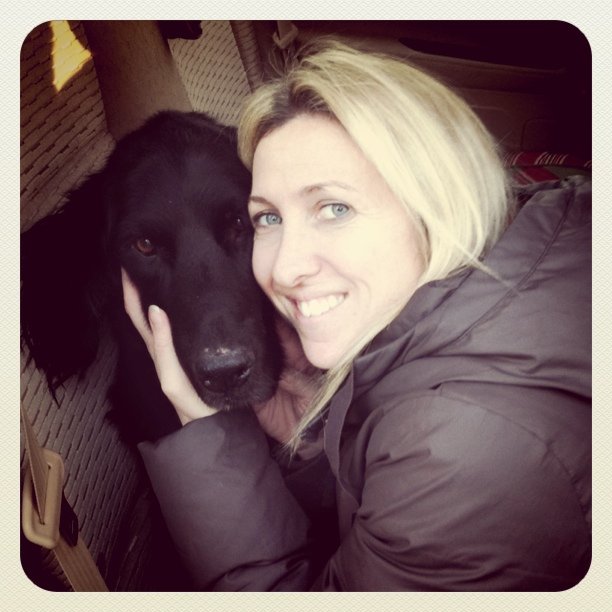 This morning, Defenders of Animals’ director Dennis put this lovely tribute in his Monday Morning Memo: 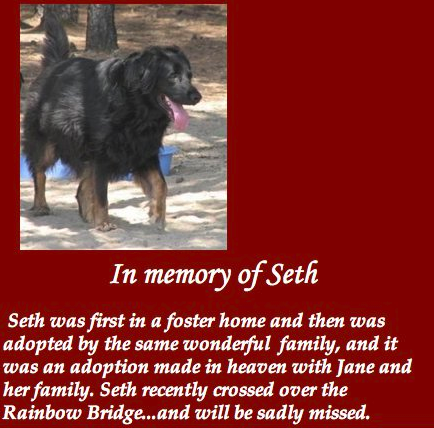 Thank you, Dennis, for everything.