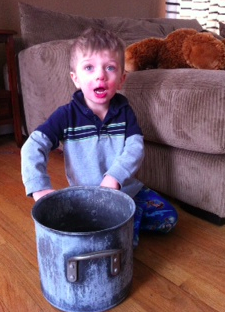 This past week was Fashion Week in New York City. Having worked in the fashion industry, it’s never been that big of a deal. I guess my favorite part was going to the Donna Karan and DKNY shows and enjoying the “show” that showed up to nod or poo-poo the new collection. I even got to lend a hand in the production of accessories for the DKNY spring line one year while I was “interning” for the Head of Inspiration (a story for another day). I was going to be backstage for the show helping accessorize the models. I was told daily for two weeks, “Matt, just stay out of the way and don’t stare at the models.” I guess as a straight guy in fashion, it was assumed I’d be the wandering one backstage looking at the models and bumping into things.

Anyhow, fast-forward 10 years and I get to stay at home and man the fort while Audrey heads off to cover fashion week. I wouldn’t trade it for the world! I take that back, I wish she didn’t have to be gone for a week, but I enjoy my time with the boys. Everyone chips in. Every night we pick up the house, line up all the jackets and shoes for tomorrow and pull tomorrows outfits, because in the morning every second counts. The boys usually get to sleep in the days clothes, because they’re boys and at that point I’m beat from chasing them around all day long. I even got to work out every day.

Unfortunately things soured. It was around 2AM Monday morning when I heard Henry yelling, “Dad, I puked.” Puke he did, all over his crib. I changed him, got him settled and brought him into bed with me. I guess I should say with me, William, Alex and Benjamin. He continued to puke through out the night, I was beat but had no choice but to suck it up, I was home alone. I also knew that it was a matter of time before the rest of the boys got it. It wasn’t just puke either, it was coming out of both ends!

The next to get hit was Alexander. He told me Monday after school that his belly felt funny. I instructed him to get to the puke bucket as soon as he felt like he was going to puke. It was a matter of if and not when. He managed to make it to the bucket, score a moral victory for me! Unfortunately an hour later, Ben puked on the couch, grand!

William was off to swimming practice that afternoon with my Mother-in-Law when I got the text, “William’s belly hurts. We’re leaving.” She kept him that night because he now had it too. I knew it was a matter of time before I got it and hoped that Audrey made it back before it happened. She was coming home Tuesday evening. Unfortunately all the wishing in the world couldn’t hold it off. I got it that night. We all managed to get through the day Tuesday, although I don’t think the boys showed quite as much sympathy as I did for them! I guess I’m the dad so it’s my job. I just hope the next time everyone gets sick, mom’s home to enjoy it with us!

I can only imagine what it must have been like to walk in the door Tuesday evening. I’m sure the smell alone was enough to curl your eyelashes. The house was a mess. I had kept up all week, but the one day down is all it takes with four boys, sick or not. I guess the fact that within an hour of being home, Audrey began disinfecting the house , says something about our state.

I guess it’s not quite the week we’d planned, but it’s certainly one we’ll remember for a long time!