When we walk into a restaurant, you can see it in their eyes. “Please don’t sit them next to us!” Four boys 6, 5, 3 and 2, surely they’re going to be nuts. We’ve all sat next to the unruly children, the screamers, the dancers, the food throwers and the criers. I wouldn’t want to be seated next to four kids! 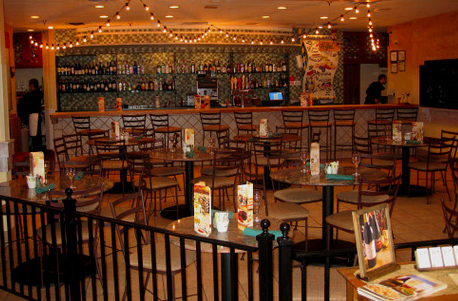 I love kids, don’t get me wrong, but not when I’m eating. As parents we think our kids are the cutest things in the world and naturally so does everyone else. They don’t!

They might think it’s cute the first time Sally does her princess fairy godmother dance, but not the second, through twentieth.

They don’t think you’re baby is a gas because he keeps dropping his crayon for you to pick up, they’re thinking what a dumb ass you are for continuing to pick it up.

Just because you can tune out your little darlings running around the table, fighting, launching projectiles, etc, doesn’t mean everyone else can.

People don’t go out to be “entertained” by your kids.

Anyhow, we’ve always tried to keep this in mind. I mean sure, with four boys, it’s not always polite conversation at a normal volume, and everyone doesn’t always stay in their chair but for the most part they do. I’m sure we still bother people from time to time, but we manage to avoid the histrionics and be respectful of those around us.

Many times we have people stop us to say how well behaved the boys are. As a parent it’s a pretty good feeling. It lets you know you’re doing things right. Friday was one of those nights. After dinner the woman from the table next to us grabbed Audrey to tell her what a good job we’re doing. Their dinner conversation was about our kids, but in a good way. Funny because it was on of those nights I saw a little different.

Henry fell asleep in the car on the way to the Olive Garden. He hadn’t napped and he didn’t want to get up for dinner. Needless to say he was cranky. I thought I might have to take him outside to let him walk it off for a few minutes.

Benjamin on the other hand was vintage Benjamin. First of all, the chairs at Olive Garden are on wheels! Kids and chairs on wheels don’t mix. I sit with my left foot hooked around the leg of his chair so he can’t slide it out and bang into the people behind him. He’s also big into bodily functions. Always burps after a drink because, “The milk makes me burp!” Despite taking them to the bathroom before we went in, he still insisted he had to pee. “It’s coming out!” I relent and take him because I know it’s going to get louder. He also snuck out through the back of his chairs a couple times and when I asked why he was out of it, he replied, “I was out of my chair because I was farting.” Finally in another case of impeccable timing, he told me he had to poop as my dinner was served. “Can you hold it buddy, we’ve already been to the bathroom twice and daddy’s food is here.” “No dad, it’s sticking out!” “No it’s not Ben.” “Yes it is, feel it!” I took his word for it! He did poop and I did manage to eat a hot meal, but it was far from Ben’s best showing at the Olive Garden.

To top the night off, as we strolled back to the car happy that our efforts were noticed, Ben managed to fall headlong into the only puddle in the parking lot. It was a good 6 inches deep and he was soaked.