One Week From Today I Will Be Mrs. Govednik!

One week from today Brian and I will be married.

Three years ago today I had not yet met Brian… but I hoped the man for me was out there and that we would meet soon.

I had purchased new running shoes that day in preparation for a road race that evening. It was at that race that I would meet Brian.

The race happened to be the 200th in a Thursday night road race series called the Red Rooster Ramble. A photographer from a local newspaper, the Warren Times-Gazette, was there to document the event, allowing us to have photographic documentation of the night we met. 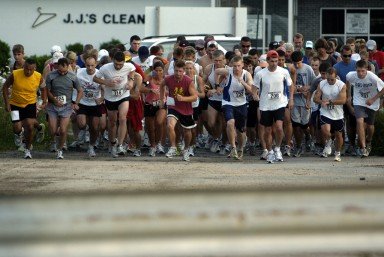 Brian is right in the front middle (maroon shirt) and I am behind him in the white tank top.

I was planning a move to New York City in the coming weeks, but Brian and I developed a friendship and began spending a lot of time together. Our friendship quickly developed into something more, but my move to NYC would force us to begin our relationship with a few states between us.

In September 2009, Brian helped me move to my Manhattan apartment:

After numerous trips back and forth and the realization that our love was growing stronger, six months later Brian helped me pack up my apartment and move back home to Rhode Island:

Since we met, I have gone through many pairs of running shoes. But I can’t bring myself to get rid of the ones I bought the night I met Brian. Or the receipt from that purchase. Or the race number I wore that night.

Some things are just too special to throw out.

As we approach the final days before the wedding, I’ve been feeling very nostalgic. When I drive by the boat launch at Independence Park, I think about our very first date, when we launched from there and took his boat to nearby Prudence Island. When I go to Brian’s work garage, I think about how he cooked me dinner there on one of our first dates (it has a full kitchen). It makes me smile to think back to the first days, weeks and months of our relationship, and how sweet, kind, caring and solicitous Brian was to me, because in the almost three years I’ve known him, the way he treats me has not changed.

One week from today I will marry the man I love with all my heart and soul. I cannot wait!