Ryan Lochte has been one athlete at the Games that my family has been watching.

My son William is just a HUGE Lochte fan!

He has posters in his room of Ryan.
He subscribed to Swimming World Magazine to read articles about Ryan and how he trains.
He’s just a little guy looking up to this elite swimmer, wanting to be just like him someday.

It’s an adorable thing to see.

As a mother who loves seeing her son look up to such a wonderful swimming role model, I also love seeing Ryan become involved in stellar things outside of the pool, too. It’s also good for my son William to see this side of Ryan Lochte, too… the one that gives back.

Ryan Lochte, visited the P&G Family Home for an honorary shave as part of Gillette’s ‘Get Started’ campaign. Ryan was awarded a blinged-out Gillette ProGlide razor to match his infamous grill and presented a check worth $25,000 to the USOC’s P&G|Team USA Youth Sports Fund (a fund aimed at providing broader access to youth sports development).

“These athletes exemplify Gillette’s conviction that in athletics and in life, a great start can go great lengths toward being successful in your endeavors,” said Patrice Louvet, President, Global Shave Care, P&G. “Gillette is linked to great starts for more than 800 million men around the world every day and through these athletes, our ‘Get Started’ campaign is aimed at educating and provided the next generation of men with a great start in their lives.”

Lochte is one of 25 Gillette brand ambassador athletes at this year’s Olympic Games who are inspiring and encouraging future generations of men and Olympians to achieve greatness through great starts in athletics and life. This Gillette campaign was the first program launched as part of P&G’s global partnership with the IOC and support of the Olympic Movement, which carries through the next five Olympics to the 2020 Games.

And I totally loved seeing Ryan answer these off-the-cuff questions!

Love these photos from the day, too! 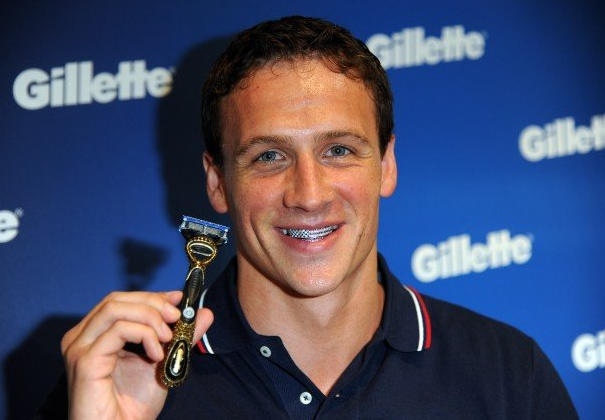