How To get rid of your daughter’s “bad boy” boyfriend… 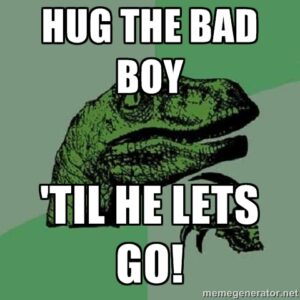 Awhile back, I began writing some informal “rules” for raising daughters. This all happened because people asked me all the time why and how I get along so well with my adult daughters. I attribute it to, I think, teaching at a high school for 30 years – seeing, feeling and hearing the “real” stories of teenaged-girl angst each and every moment of each school day.

Yes, I listened and I learned, folks. And one area in which I learned my lessons very well was Boyfriend 101.

So… yesterday I was having lunch with an old friend who just happens to have a 15-year old daughter. Bless her big, crazy heart, because this daughter is a decade younger than her son and she’s forgotten lots of things. OK. Let the fun begin because this daughter is interested in a boy that my friend thinks is totally, absolutely, unequivocally Bad with a capital B.

“Why?” I asked innocently.

My friend emailed me this morning, asking, “Don’t even tell me that this rule works.”

“Every time,” I answered.

Here’s what I emailed…

This is especially true of the bad boy.

Bad Boys are NEVER welcomed into a home with the obligatory embrace that I suggest, so you completely throw them off their game when you do. Since they are never welcomed – when embraced, they get confused and run. Simple.

This rule works, oh, 99% of the time… because there’s always that slight possibility that the boyfriend (even the “bad boy”) will begin to love your love so much that he will come to visit even when your daughter is not home.

Then it becomes sticky, because your welcoming embrace has made your daughter examine the boyfriend very closely, consequently cringing at his every move; but the boyfriend has never been embraced by any parent, anywhere, any time, and he just plain old likes it.

Then you must, must, must say to your daughter, “Let him down easy. He really is a nice boy.”

She will make you proud (and hopefully the ex-boyfriend will get over you!).

Of course your daughter will catch on that you have this welcome and embrace ’til it’s over plan, but you must never admit it. Until her wedding day.

Then you just smile and say, “You know, if you hadn’t fallen in love with _____ and _____ and ____ and ____, etc., and learned all about personalities and characteristics and idiosyncrasies, you would never have realized the power of true love that you know on this day.”

You answer, “I would have gladly welcomed and embraced any of those nice boys into our family.”

And, as fate (and technology) would have it, I am now Facebook friends with more than one of these “boys” from both of my daughters’ pasts. Yeah, it’s pretty totally cool and awesome, dude.

*Now, with two 13-year old granddaughters, I must immediately pass Boyfriend 101 – RULE #1 along to my 2 daughters-in-law.