Do I have untold stories inside of me?

#BlogHerWritingLab ~ Do I have untold stories in side of me?

Tuesday, April 26, 2016 – Do you have a lot of untold stories inside of you? How do you feel carrying them around?

I’m not sure how to answer this question.

Do I have my own life stories to finish?

Do I have stories, as in ideas, outlines, half-written, written stories stored in my head?

I have wanderlust, but with my big family, my gaggle of grandkids (11, soon-to-be 12) and Caregiving my elderly Mom, my husband and I cannot bust out on a whim.

I combine my real-life Story with my in-my-head Stories. I have a little series going, combining my wanderlust story with my story as a grandmother. You know the one… 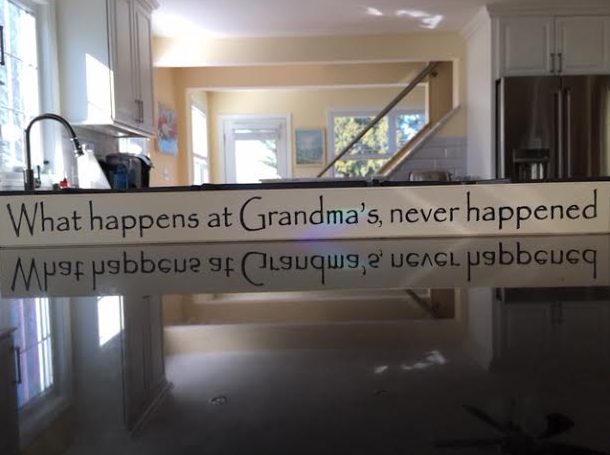 When our grandchildren began to arrive back in 2001, my mind SOARED with ideas as my heart multiplied its love more than I could ever have imagined. Poems. Stories. Little rhyming stanzas from a Grandma to her grandchildren.

It’s about adult children giving grandparents detailed, specific, minute, cataloged, meticulous instructions on how to care for children… like we’ve never done it before! Ah, yes. But we, as grandparents, just wanna have fun. Kind of like Cyndi Lauper, except with grandkids. But we also want to enrich our grandchildren with marvelous, unforgettable adventures…

And this is where my book series comes in. This is Book One ~

Grammy and Grampy sat quite still while Mommy and Daddy bustled and filled their heads with “where” and “when” and “that” and “this”, of “do’s” and “don’ts”… and one last kiss.

But in the time it took to say, “Bye, bye,” Grammy had whispered, “African Safari.”

Then tucked in a snuggly and packs on backs, with Puppy and sunscreen and Cracker Jacks… Harriet, Esther and Oliver, too, readied for their rendezvous.

Then whirlwind, tailwind, lickedy-split, in leaps and bounds off they went…

To a land enchanted with mangrove swamps, with ferns and orchids and parrots that talked.

And as they tiptoed further through, zebras and cheetahs leaped into view.

But as Grampy fetched his telescope, thunderous stomping of antelope shook the land beneath their toes, causing the Limpopo to overflow… tossing the travelers quite upended, downstream, swiftstream, as ringhals with venom writhed and wrapped and whipped and hissed…

Until Grammy grabbed the tail of a yellowfish. Then laughing, swirling, fancy-free, she called, “Hey, everybody! Grab onto me!”

Swishing and swashing and swiveling hogwild, they swam with the carp until a crocodile winked its eyes and snapped its teeth… ready to devour this unexpected feast.

But suddenly Grampy, with no hems nor haws, hooked right onto a cormorant’s claws… lifting Harriet, Esther, Oliver too, and Puppy and Grammy with her new hair-do.

And much like that of a meteorite, they flew high among songbirds, vultures and eagles in flight.

When lo and behold, the cormorant stopped… abruptly, suddenly, on a Drakensberg top. It folded its wings with effortless grace, creating a magnificent hiding place for Grammy and Grampy and all-aboard from baboons and hyenas who squealed and explored, and from lions and leopards and jackals who roared.

But more stentorian than all of this, a prodigious sneeze escaped the lips of Puppy, who then, sneezed and sneezed and sneezed again… propelling the travelers to disembark into the den of a sleepy aardvark, who opened his eyes and stuck out its tongue, thinking the intruders were ants on the run.

Now all sticky, all gooey, all uncomfortably damp, Grammy announced, “It’s time for a bath!”

So into the Orange they vaulted and rushed, to the irksome dismay of a hippopotamus. And sooner than soon, in multitudes, cape buffalo and elephants stomped into view.

But more perfunctory and more swift than one can surmise, Grammy leaped upon a giraffe’s backside… checking her watch and charting her charts, calling, “Hop up! Hop on! It’s time to depart!”

So whirlwind, tailwind, lickedy-split, in leaps and bounds home they went.

But the strange metamorphosis of Grammy’s hair was a telltale sign that they had been SOMEWHERE!

I am working on Books Two & Three now, one about an adventure under the sea and another about the Ididerod.

I feel completely enriched carrying my untold stories inside of me, the real and the imaginary.

These Stories are a map to my future.