On October 5, my countdown began: 30 days until my 30th birthday. In honor of this, on each of the 30 days leading up to my birthday I will recount one memory from the past 30 years… either one that has helped define me, one that makes me laugh, one that makes me think, one that encourages me…  or maybe a little of everything. If possible, I will post a photo to go along with the memory.

My Nana and Papa celebrated their 50th wedding anniversary in September of 1990. To honor this milestone, my parents and my dad’s two brothers planned a big surprise party for them.

At some point in the planning process, Nana and Papa found out about the party, but we still wanted to surprise them with something, so it was decided that that something would be a limousine ride to their bash.

I was very excited about this because it meant that I would get to ride in a limousine, something I had never done.

I pictured what it would be like inside. I wondered if it would have a sunroof. In movies, people riding in limos always popped their heads out of the tops of limos.

I remember asking Mom what color she thought it would be. Black, I had decided, was too reminiscent of a funeral, while white was too wedding-ish. I hoped it would be grey. Yes, grey would be the perfect color.

Before the party, we took pictures in our front yard. Mom had bought me my first-ever Laura Ashley dress for the occasion, which was a pretty big deal, and I smiled proudly in the photos. The school year had just begun, so we were all still freshly tanned from the summer.

We then waited for the limo to arrive at our house. This was the plan: Mom and Dad would head over to the hotel, where the party was taking place, and mingle with the guests. Meanwhile, my two brothers, my oldest brother’s girlfriend and Audrey and I would ride to Nana and Papa’s house, surprising them with the limo.

When the limo showed up, I was very pleased: not only was it grey, but it was gorgeous inside and even had a sunroof!  Mom took a bunch of photos and then took off to the party. And then we were off in the limo.

We were about a mile from our house when the limo pulled over and stopped. Or, I should say, broke down.

We sat there for a few minutes while the driver tried to figure out what happened. This was before the days of cell phones, so we couldn’t immediately let anyone outside of the limo know what was going on.

I don’t quite recall how this happened, but the driver was able to get in touch with the limo company, which was located nearby. They sent someone to try to help us out. It didn’t work.

At that point, I remember thinking that a white limo, or even a black one, would do. I just wanted to ride to Nana and Papa’s house in a limo that worked.

But there were no other limos available.

We had spent a lot of time in the broken down limo before we realized that we would have to give up the limo dream. So one of my brothers ran back up to our house, got his car and drove us all to Nana and Papa’s house in it, where we told them all about our adventure and how the plan had been to pick them up in a limo.

Because of that snafu, we ended up making Nana and Papa rather late to their own party, but they ended up having a fantastic time. It was a great party with family, friends, good food, a live band and a lot of dancing. And Nana, of course, always loved a party.

One of my favorite photos of me and Dad was taken that night while we danced to the band. 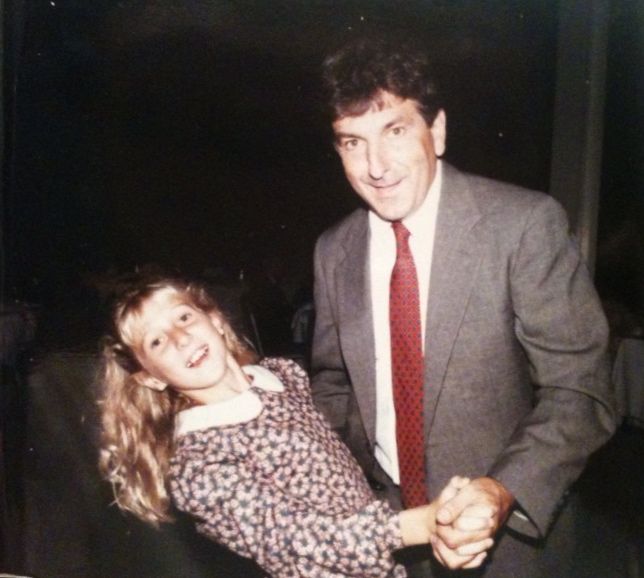