Another morning drop-off at preschool under my belt, and another morning of head scratching behind me, one more drop-off and two more pick-ups to go and I’m already wishing it was Friday.  I’m not an old curmudgeon, I swear, but the parking lots at the boys’ school drive me insane.  Not so much the lots, but rather the people in them and the level of ignorance they display. 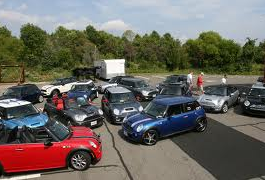 The preschool has a nice big lot, and generally everyone has a spot.  When the spaces fill up, cars line up down the middle and there’s plenty of room for everyone (in theory).  The problem is, for whatever reason, certain people feel entitled, or are just plain ignorant to the fact that there are other people who need to drop their kids as well.  People who can’t park between the lines aside, what really drives me nuts is the ones that start occupying the middle lane before all the spots are filled.  I’m sorry you have trouble walking the extra thirty feet from the open space, but parking in the middle row makes it difficult for the other parents who need to park in that open space, especially when you have trouble finding the middle and park way to close to one side or the other which causes the other dopes to park off center as well.  Soon, a lot that has plenty of space is clogged, even though there are empty spaces.

The elementary school is a different beast altogether.  The lot is small and there’s not enough room for everyone.  I have to get there almost a half an hour early to assure I get a space.  People do make their own spaces (guilty!), but if they’re not blocking anyone’s entrance or exit, it doesn’t really bother me.  What really bugs me is that people seem to loose sight of the fact that it’s a school parking lot and there’s little kids darting in and out of cars.  People zip through the lot in their giant SUV’s, scanning for an open spot while talking on their cell phones.  Hang up, slow down and park on the street.  Little Johnny isn’t going to die if he has to walk an extra hundred feet to get to the car.

The New England weather has compounded the problem recently, with a foot of snow last week, the lots are even smaller and the temperature in the lot has risen.  Twice in the last two weeks, mothers have had words because one can’t seem to figure out that she’s not the only person there to pick up her child and decides to flat out block a lane.

All I’d like to see is a little common courtesy.  Realize that everyone is there to pick up their kids and we’re all dealing with the same problems in the lot.  Take the open space if it’s available and make sure you’re in the lines or leaving enough room for everyone to get around you.  Slow down and hang up the phone, your conversation isn’t as important as the life of the child who might run out from between two SUV’s.  Your focus should be on that, not whatever riveting conversation you may be having.  If you can, put your child on the bus or arrange for a carpool so there’s not so many cars there.  Lastly, if there’s no more room, park down the street and walk, or get there a little earlier so you’re not clogging up the lot for everyone else.