When I was a boy, my parents bought me a toy that used little molds to create rubber bugs. I thought it was awesome. One of the few times I got in trouble at school was when I brought a handful of them in and was chasing the girls with them. I’ve often wished that there was something like that for my boys to enjoy.

. Zombie lab is a totally awesome (yes, I just reverted back to 80’s lingo!) zombie head in which you create experiments you can eat. Look, it says, “Drink Zombie Barf” Right on the front of the box! When’s the last time you’ve sen “barf” printed on anything?

You can peel out bug molds and inject them with a gel that sets into a gummy like insect. That was more than enough to get my thumbs up, the bugs I made as a kid were inedible, although I may have tried to eat one or two. You can also mix up a formula in the brain cavity which bubbles over the top and can be scooped out and enjoy. It looks really cool and tastes great. The boys LOVE eating brain! Finally, the zombie barfs out a delicious drink, that I’ll admit, looks really gross. It always gets a big laugh out of the boys!

In addition, Umagine sells several add-ons such as the Bug Lab to create even more edible bugs, the Wax Snax / Snot Shot for edible ear wax and snot and last but not least, the Stomach Churner for mixing up stomach acids and zombie warts.

I’m certain the boys will be asking for the rest of these accessories this Christmas. Doctor Dreadful Zombie Lab

is completely grass and everything the boys love. We’ve had so much fun as mad scientists even though we haven’t been able to talk mom into painting the kitchen black yet! 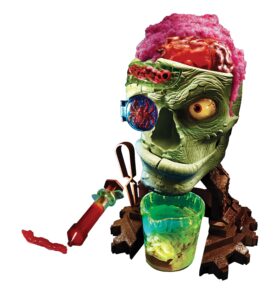