Brand new underwear, a fire and lots of optimism in the New Year

I had recently read that wearing a new pair of underwear on New Year’s Day is particularly lucky.

Early on New Year’s morning, Barry and I were busy preparing our annual Family Blessings Feast.  A cup of hot just-as-I-love it black coffee was nearby.  And, oh yeah… I was wearing my new underwear.

My cell phone rang.  My daughter Jane’s name popped up.  I thought this was a little “Happy New Year” call.

Jane was saying, calm and frantic all at the same time, “Brian’s truck is on fire in the garage the dogs are in the back yard come quick help…”

Brian owns a commercial garage where he keeps all of his landscaping trucks and equipment, and there is a little space where their 3 dogs can run and play.  I immediately thought “the garage” was that garage.

“I did. Please come. The dogs are in the back yard…”  Jane’s voice was filled with fright.

Jane and Brian live a bit over a mile from Barry and me.  By then, Barry was in the car, not yet even knowing what was going on.  We had no coats on… nothing but that urgency to help Jane and her family.  Jane and Brian have a detached garage and behind the garage is a nice little lawn where their 3 dogs run and play.  I could only imagine the dogs trapped back there and Jane and Brian frantically trying to rescue them…

We live in a small, peaceful New England town and the early New Year and recent snowfall all sparkly in the morning sunshine was broken with the sight and sounds of firetrucks and police cruisers racing toward Jane and Brian’s street.  Thick, black plumes of smoke billowed into the New Year sky.

My heart was in my throat.  I couldn’t think.  I almost couldn’t breathe.

It may have taken one minute to get there.  Maybe two.  Policemen were already blocking the narrow one-way street and not allowing passage of on-lookers who had seen the smoke and heard the firetrucks.

Barry screeched into a street parking spot. I jumped from the car and raced across the street.

A policeman was waving me away.

I managed to get out, “That’s my daughter’s house.  I need to help her with her dogs…”

He immediately waved me in.

I ran past the firetrucks.  The police cruisers.  The firemen and policemen focused, focused. The multiple fire hoses.

Then I saw Jane.  On her front sidewalk.  With all 3 dogs.

Jane and Brian own their 2-family home and their upstairs tenants were outside with them, helping hold the frightened dogs by their collars.

I saw Brian.  His face was frozen white.  His diesel truck was engulfed in flames.  By then, Barry was standing right behind him.  Total shock.

I couldn’t see the garage through the flames, the smoke and the foam pouring from the fire hoses.

We all ran back to Barry’s car, passing a fire-site I hope to never see again.  We got the dogs in the car.  We circled the block.  We couldn’t even speak… 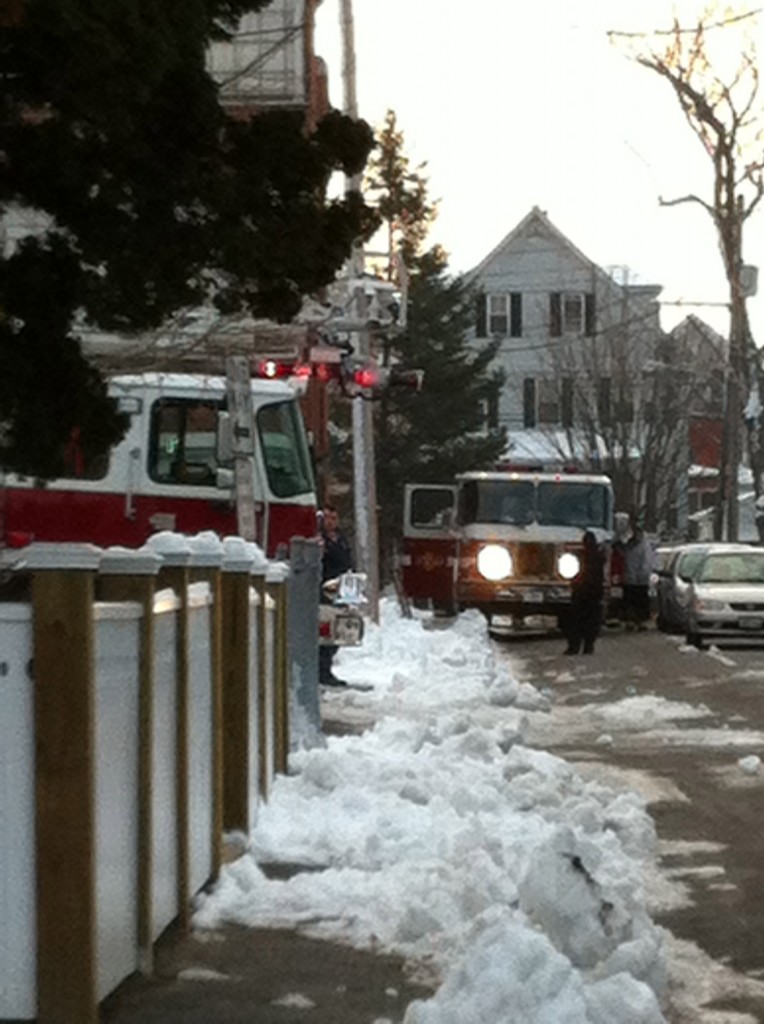 Barry and I drove to our home with Ryder, Tansy and Jethro… and I will thank God to infinity for saving the precious lives of our daughter, son-in-law, grandpups and their tenants.  The rest can be taken care of…

Turns out Brian’s plugged-in diesel truck caught fire in the garage, but his ever-preparedness and quick thinking with 2 handy fire extinguishers as Jane was dialing 911 helped in saving the garage.  The driveway is in great disrepair.  The truck is no more.

I wish to thank the Town of Bristol Fire and Police Departments for their immediate aid on New Year’s morning.  Jane told me later that as she was hanging up from her 911 call, she could hear the approaching sirens of the fire and police vehicles.  I love this town.

Much later in the day, after our Family Feast was over and everyone but Jane’s family had left, Jane and I were recapping the New Year morning fire. It was then that I remembered my new lucky underwear.  I said to Jane, “Thank goodness I was wearing my new, lucky New Year underwear this morning.”

I told Jane about my lucky New Year underwear.

“Thank goodness I was wearing my new, lucky New Year underwear,” I repeated.  “Because just think what awful things may have happened otherwise.”