Bringing Back Marbles because Marbles are part of My Story.

Bringing Back Marbles because Marbles are part of My Story.

It’s interesting what people save.  What we find important.  What we find valuable.  What makes us happy. What becomes part of The Story of our lives. What we cannot part with no matter how much de-cluttering, sorting, cleansing, donating, downsizing we do.

It’s very interesting to me that my husband Barry and I each saved our MARBLES from our childhoods, each kept in glass jars (mine a bit bigger and more full!). We may have combined everything else in our lives, but not our Marbles!

These little glass spheres remain a fantastical part of our childhoods, kept high up on a home office shelf. They are the color, the energy, the friends, the wonder of our yesteryears. Dreamkeepers! 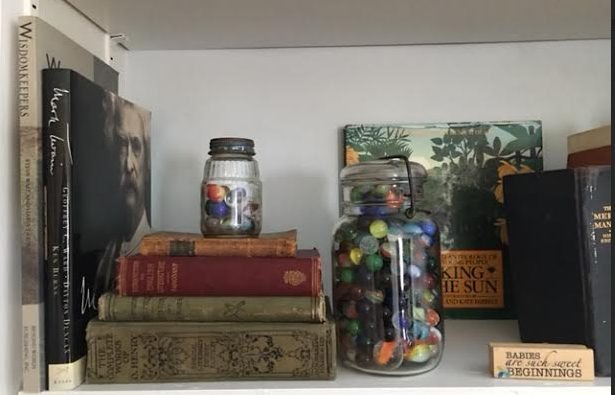 These Marbles are mixtures of colors in little sphere shapes that brought such fun to so many days and nights of childhood. I had a little pouch with a drawstring tie, I don’t remember of what fabric, where I kept my traveling marbles. My prized Marble was and still is a large one with an orange-colored slice inside the glass.  I found this Marble on my school playground in California when I was 6 or 7 years old and thought it looked like someone had put a carrot shaving in it. This marble was scratched and dinged way back then, as it still is, most likely discarded because of its condition. I still remember the marvel of finding that shooter in the sand, like a nugget of gold to me… 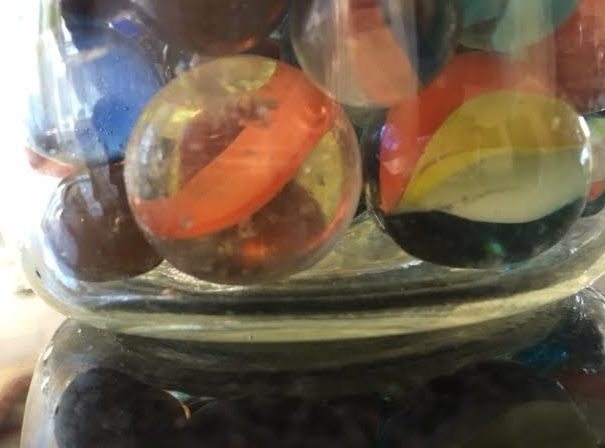 Barry and I each remember hours and hours of playground games, drawing circles in the sand and getting games underway — real games, made-up games, games for keeps and games all fair. Way, way back in the 1950’s and 60’s, Barry was all the way across the country shooting and flicking marbles in Rhode Island while I was drawing circles and shooting and flicking marbles in California sand.

Each of us remembers tossing Marbles on living room rugs, on sidewalks on hot summer days and nights, drawing those circles in the sand and getting games underway.

Awhile back, I even wrote an entire post about Marbles:

WHAT is the Game of Marbles:  There are many variations of the Game of Marbles, but each game is a game of skill, concentration, coordination, competition and fun using small, colored glass balls/spheres. Both the little ball/sphere itself and the game are called Marbles.

WHO, WHERE and WHEN about Marbles: Marbles have been discovered in archeological digs all over the world, including the pyramid tombs of Egyptian kings, in Africa, the Middle East, Europe and in Native American burial grounds, leading historians to surmise that people from all places and time have played games with small spheres.

WHY were Marbles invented:  Fun.  Entertainment.  Challenge.  Competition. George Washington, Thomas Jefferson and Abraham Lincoln were known to be earnest Marbles enthusiasts.  So, if you love the Game of Marbles, you are in very good company!

HOW do you play the Game of Marbles:  Ah, interesting question.  Some common Games of Marbles include Cherry Pit, Ring Taw, Boss out, Bridgeboard, Nine Holes… and many more. Games vary depending upon country or region, so it’s best to get a good Marbles book to get you started on the right toss.

Marbles are timeless and universally loved.  Why not dig through some of your stuff to find some old Marbles to shoot and flicker with your kids & grandkids.  Maybe even buy a good book about Games of Marbles, and some brand new magic glass spheres.

Just remember to tell your kids if the games are for keeps (marbles returned to owners) or all fair (winner keeps all).  Show ’em your stuff!

I guess I didn’t need to know all of this interesting stuff about Marbles when I was a kid. But it surely IS interesting stuff, and it’s something I’ll pass along to my grandkids when I bust out my marbles with them.

I just remember carrying around my little pouch with the little drawstring like it was a sack of money. Memory Money.

It’s time those Dreamkeepers come down off the shelf for our grandkids — Bringing Back Marbles — as part of Their Stories too, maybe!