My Team 4all submission!

A competitive swimmer until age 16, and a long distance runner in high school, I struggled with maintaining a healthy lifestyle once the routine of scheduled practices (and parents who will drive you there and then cook healthy dinners for you) came to an end.

The years after high school were marked with inconsistent exercise and a lot of yo-yo dieting, and I was constantly discouraged and disappointment in myself.

I decided that a big lifestyle change was in order. This was around the time that Audrey’s husband, Matt, had lost over 65 lbs. by eating right and working out with a trainer. I started going to Spinning classes with him and soon got addicted.

I also started going to to a treadmill class called Tread On, in which the trainer would tell us to speed up, increase the incline, do various drills, etc. on the treadmill throughout the class. At first, I was only able to do a walk/run combination during the classes, but soon the running portions started to feel really good, and I was able to do more running than walking. And as an added bonus, I was gradually taking weight off.

Little by little, I began building running endurance, gaining speed and being able to run further.

Feeling myself getting stronger, my competitive roots came back and I decided to train for a marathon the following spring.

I trained and trained, and when I achieved that big goal I had set for myself – running a marathon – it was one of the best feelings of my life. I even qualified for the Boston Marathon!

Since then, I have competed in two more marathons (including the Boston Marathon), as well as countless other road races and three Half-Ironman-distance triathlons.

Since I got on that scale back in 2008 and vowed to lose weight, I have stayed consistently active, although towards the end of last year I fell off track a little bit.

After two years of training and racing hard, I was a little burned out. I took a bit of a break, which was needed, but also I put on a little weight.

I currently want to lose about 15 lbs., but I know and I can do it. I’ve done it before, so I don’t view it as a daunting task. Now I know what both my body and mind need in order to achieve my fitness goals. 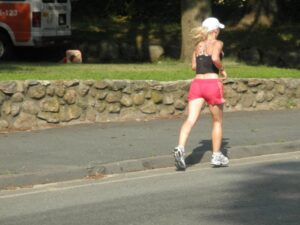 In order to gain power in the New Year, I’m planning on focusing on the achievements of others, and finding inspiration in them… starting with my mom.

At age 57, she completed her first Half Ironman triathlon in 2010, alongside me, my brother and my sister-in-law.

My mom has always been active, but she was never into swimming, biking or running. In fact, a few years ago, I doubt she even thought she could complete a 5k race.

Seeing her (and others) identify major, perhaps mind-boggling, challenges they would like to go after (a marathon, a triathlon, a 5K) – and going for them – motivates me. It fuels me.

I would love to be part of Team 4all! I would work hard to inspire others to gain power by adopting a “why not?” attitude when it comes to their fitness goals!

4all is holding tryouts for 10 spots on the Team 4all roster. This is my submission!