Day 30 of 31 Days of Poems for Kids:  THE ARROW AND THE SONG by Henry Wadsworth Longfellow

You may recognize the famous first couple of lines of the poem THE ARROW AND THE SONG by 19th century American poet Henry Wadsworth Longfellow. But take the time today to really read the entire poem. 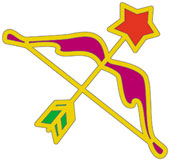 Talk about the voice, or speaker, of the poem.   Who shot the arrow?  Who breathed the song?  Is the speaker a man, a woman or perhaps a child?  Was the arrow shot in sport?  Fun?  Hunt?  Did the speaker breathe the song in sadness?  Love?  Happiness?  Allow your children to answer… to feel and express what they see and hear in the poem.

Talk about the concrete thing, the real things… the arrow.  The action of shooting the arrow has lasting consequences.  Although it travels swiftly and seemingly disappears, the arrow still exists.  The arrow will always exist.  Could the arrow have hurt someone or something in its flight?

It’s the same with a word, a phrase, the song.  Although the song takes a seemingly invisible flight, the words have penetrated a mind and soul and heart.  The song will always exist.  Could the song have hurt someone just as much as it seems to have delighted someone?

Talk to your children about the the unbroken-ness of the arrow and the song.  Talk about the power of the arrows we shoot and the songs we breathe.  Make them count.  Know the flights they take.  What we do with both of our hands and our hearts touch others in ways we may never know and never measure. In this poem, the arrow lands unbroken… it has hurt nothing.  The song landed in the heart of a friend.  All is well.  All is well.

The great teachable lesson within THE ARROW AND THE SONG is how our actions and words are forever… and that gives us, as human beings, a great deal of responsibility to always try to do and say the right things.

Remember that LITERACY is all about the WORDS – Written, Spoken & Felt. I hope you and your children have felt this lovely poem as you’ve walked with Henry Wadsworth Longfellow today.

If you and your children enjoyed this poem, you may also enjoy Days 1 – 29:
Fog, by Carl Sandburg
from Five Haiku, by Paul Eluard
Love is, by Nikki Giovanni
Temple Bell, by Yosa Buson
The Snail, by Richard Wright
Evening, by Sappho
The Red Wheelbarrow, by William Carlos William
The White Horse, by D. H. Lawrenc
Dragonfly Catcher, by Chiyojo
OATH OF FRIENDSHIP, Anonymous, China, 1st century B.C.
HOW DOTH THE LITTLE CROCODILE, by Lewis Carroll
SILLY SONG, by Federico Garcia Lorca
The Giraffe, by Ron Padgett
German Shepherd, by Myra Cohn Livingston
Outwitted, by Edwin Markham
My Father, by Yehuda Amichai
Window, by Czeslaw Milosz
I Cry, by Tupac Shakur
I, Too, Sing America, by Langston Hughes
Brotherhood, by Octavio Paz
Lullaby, Akan, African
Today, by Frank O’Hara
There Was an Old Man with a Beard, by Edward Lear
Cradle Song, by Sarojini Naidu
Last Night I Dreamed of Chickens, by Jack Prelutsky
Full Moon, by Walter de la Mar
Grass, by Kim Su-yeong
I Sing for the Animals, by Teton Sioux Indians
Red Slippers, by Amy Lowell
Share
Sharon